I am sitting here typing away while sipping a glass of my Elder Flower champagne and chomping on a thick slice of spelt flour bread.  It is very satisfying to savour things that you've made yourself.

I have now completed my second block of edam cheese.  Gino was able to observe me this time and came up with a couple of little innovations.  He fashioned a wire hanger for me so I can leave my thermometer in the saucepan.  This is a big help as I am constantly having to monitor the temperature.  Later I was wondering how I would know what vintage each block of cheese was and Gino suggested waxing my cheese, then putting a piece of paper with the date and waxing over it a couple of times.  It looks great and is easy to read.  I again made some white cheese with the remaining curds to sprinkle over our salads.  It tastes so good.  The next day I made butter.  I had left 5 litres of milk in the fridge to separate   Then I scooped off the cream and put it into an antique butter churn that I had borrowed from my neighbour Monique.  I churned for over an hour and although I had made cream it wasn't getting to the "breaking" stage.  A break is when the solid and the liquid components separate.  I transferred it to a bowl and continued hand beating.  After a while of that I got out my electric beaters and finally it broke; only one second before it broke me.  Once you have the grains of butters you wash and churn, wash and churn until the liquid runs clear.  Then you pat it with two wooden spoons to squeeze out the whey, salt it and freeze it for about 10 minutes.  You get a very little butter from all that milk and it is extremely labour intensive.  I am not sure I will be making butter on a regular basis but I am glad I had a go.  At the very least I am not so concerned about the high price of butter now I see how much time and milk goes into making it. 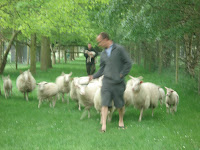 Still on the cheese front my friend Paula from Christchurch kindly organised a visit to her friend Chris' lifestyle block.  Chris has a small flock of East Fresian sheep - in fact one of the very few flocks of this type of sheep in New Zealand.  They are funny looking things, big and woolly but with no wool on their legs or faces.  They look like elegant old ladies in fur coats.  They have a very loud, deep, "baa" and I was a little freaked out as they chased us down the run.  Probably not as freaked out as Gino who had the container of field peas that they were madly trying to eat.  Chris has a very flash mobile milking machine.  Once his chosen ewe was in the pen eating her peas he very quickly milked her.  It seemed to only take a few minutes and we had two litres of milk.  We tried it back as Paula's while it was still warm from the sheep.  Probably best to drink it chilled like all milk.  I didn't really like the flavour - it seemed to have a sour moth ball flavour to it.  I am hoping this is linked to their diet of field peas rather than a distinctly sheepy flavour.  I will have to try sheep milk from another source to test my theory.  Gino has been happily using it in our coffee and I don't notice the flavour.  It is very creamy and yum in coffee. 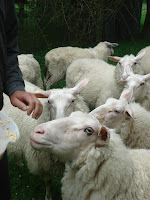 Katherine continues to thrive.  She appears to be going through either the terrible twos or her teen years - I'm not too sure about the life cycle of a sheep.  She took great pleasure the other night leading Gino and I on a merry dance around and over our neighbours raised flower beds taking delicate mouthfuls of plants mid stride.  I still take her out morning and evening to graze for half an hour on the road side borders.  That way she gets all the yummy broad leaf plants that the other sheep can't get to.  I now carry her kibble bucket with me so that all I have to do is bang on the bucket to get her to follow me.  The rest of the flock are now back in her paddock and she has had some close encounters but continues to be weary.  There is not much I go about the fact that she just doesn't realise she is a sheep!  Our other neighbours have purchased three lambs and their mum.  They are crossed with Romney but are meant to be Damara sheep which are broad tailed African sheep with hair rather than wool.  They look more like goats.  Apparently they make good milking sheep but I am not sure if she intends for me to milk them for her or not.  We will see.  I did suggest to Gino we could have one sheep, one goat and one jersey cow and I could offer a variety of cheeses that way.  He was unimpressed with my idea.  : ) 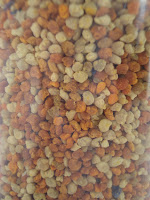 Gino has had a sore throat the last couple of days and I've been feeling a little funny myself although this is most likely rampant hypochondria   I have been making a magic potion suggested by my Mum last year when I was sick in the UK.  You boil up water and as many cloves of garlic as you can handle.  Then squeeze in the juice from a couple of lemons and two big spoonfuls of honey.  The garlic is quite tough on the stomach and the honey acts as a buffer.  Have a couple of big cups morning and night and you'll kick your cold in a couple of days.  I am also dosing myself up with bee pollen.  Pollen is full of goodness - its a bit like taking a multi vitamin.  For hayfever sufferers like myself it also helps reduce hayfever by exposing your body to local pollen.  It won't happen straight away but by next season you should notice a difference.  I've also been having flaky yeast on my toast which is high in B vitamins   Along with magnesium, fish oil and serotonin precursor amino acids I am hoping to stay well and healthy right through Christmas.

Speaking of Christmas - its coming - soon.  Don't stick your head in the sand.  It is much better to get prepared in November so that you can enjoy the season in December.  Otherwise every Christmas carol becomes another reminder of how hopelessly behind you are rather than what it should be - a joyful refrain.  I am making some tiny cross stitched Christmas tree decorations.  They are very cute.  I'll post some photos next week.  I am forcing myself to spend an hour a day prepping for Christmas and I play carols to get myself in the mood.  Its a lot of fun but I admit - slightly nutty.

The other marvellous, exciting news is I am finally writing.  My friend Yanina suggested I have a go at free writing and I am also reading a couple of books which served to boot me up the backside.  Gino says he is happy to support an author in the family even if I remain penniless.  I have committed to writing for two hours every day.  At the moment it is a gobbly gook of opinion pieces, brain dumps, short bits of dialogue, fragments of future novels etc.  The content doesn't really matter at this stage.  It is just important to develop the habit and to get used to getting ideas down on paper.  I am excited to see how it will evolve.

That's all from me this week.  I have to card as much wool as I can as I am attending the Spinning Craft Group tomorrow.  Hopefully I will be spinning wool by the end of the day.  Have a great week and remember we are creative beings.  When we are creating we are expressing our true nature.  Grab any spare moment to get creative even if it just involves trying a new recipe for dinner, growing a vegetable you've never grown before or making a handmade gift for a friend.  Life is full of opportunities to be creative but unfortunately we're usually too busy to see them.